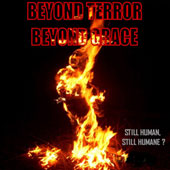 This is Beyond Terror Beyond Grace‘s debut, a young band from Australia’s Blue Mountains, and it consist of four short tracks of a non-defined mix of extreme music styles. The opening riff is a total killer hyperfast blast of violence strongly influenced by Rotten Sound, Jigsore Terror, To Separate The Flesh From The Bones and the likes and made me hope for the best… if things were following that line all the time we could have had something real interesting if not overly complex or catchy. However there is a big flaw that I spotted almost immediately,and it’s that these songs are made up of riffs so eterogeneous that it feels like hearing Praxis or Mr Bungle (well not exactly to be honest but you get the point). While that opening blast was full of energy, the mid tempo Death Metal slam that follows close is among the most boring I have ever heard, kind of Internal Bleeding stripped down to play even more basic sloppy death. The vocals are a schizoid chamaleon which vary completely timbre from grunt to screams according to the underlying riff, and something weird happened when those got higher: a cold, pine smelling breeze entered my room and I could hear the penguins approaching from beyond the mist… Ah! No really they sound more new black metal than Grind, but that’s just a matter of perspective, I guess I could get used to them if we get over the bigger flaws. To tell the truth, I hate the Death Metal slam mid tempos in here, but the faster riffs range really from average to excellent. They should really drop the useless parts where the vocals become guttural and keep the faster parts only, or just try to improve songwriting of the slower bridges, becouse those are real lame. As it is, this is neither fish nor meat as they say here. The Cd has a very short duration, just like 9 minutes or so, but I guess it explores clearly what the intent of this band is. The guys look very young so we can expect some serious improvement I think. I hope the singer is just growing his hair, and not keeping that cut on purpose, though (ah ah, j/k). Nothing much to add to this, working a good layout when flames are involved is real though and well, it doesnt work in here either, but this is an Ep so things might have been made with some hurry. The cover depicts a man or a scarecrow shrouded in flames, and little else. At least the quality of the pics is sharp.