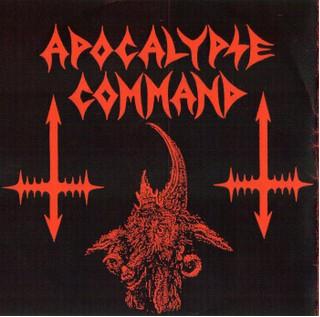 Might the gods of the underworld electrocute me with lightning if this is not one of the most fucking brutal violent blasphemic fucking shits I have heard in the last five fucking years. There is some mystery around this band which I cannot completely unwrap, but I like it this way, it’s like getting a new Von – like puzzle.

Just a 1 page blood red booklet with a goat, a raw logo and title tracks like “Evil Necromancy”, “Blasphemy in Darkness” and “Mayhemic Overkill”. Can you ask for MORE than this?

As for music, there is really nothing better I can thing of either. Take Blasphemy, Archgoat, Centurian, Demonized, old Sarcofago, early Sodom, Vulcano “Bloody Vengeance” and some early Morbid Angel demo era riffs and mix the whole thing up. The vocals are a raspy, serpentine, echo-filled thing which spew insults to god with a hate only the morninstar could parallel. I so fucking love their huge reverb, it’s so damn vintage. And the best thing is definitely the riffs – twisted and powerful, but stripped to the basics. There are just 2 or 3 of them for each song plus some Slayer-ish solos, but they’re just the right ones, they have a flow which I only heard in Angel Corpse. Everything in this demo fits the picture perfectly, I cannot test any weak spots. Even the rough, acrid sound has its role in creating the sulphuric mood.

So far, best release of the year.