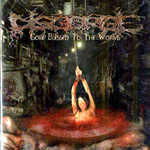 I admit I was quite disappointed when I read that Edgar’s label released Karnarium‘s discography without even mentioning anything since I released that band’s first 7″. Not that I needed any royalties, but at least a free copy and an email of courtesy was the least he could do. Nonetheless, I will be objective when judging his band’s newest work.

The cover artwork is not my piece of cake. The computer 3D effects are really out of my schema, I really enjoyed the autopsy on the first album and the sculpture in the second one but starting from the third album, the vintage looks seemed to disappear and now we got this new work from Phlegeton which while full of gore, really looks too shiny and modern for an early Carcass inspired band. Rot and CGI don’t really go hand in hand, no matter how sick you make it. And there is not even a lyricsheet inside. Pff.

But coming to the music, the good shit is still crammed in like maggots on a rotting bowl of viscera. Edgar’s vocals are very sinilar in style to those of Antimo, same deep froglike gargles with occasional phlegmy leaks, which are still perfect for the onslaiught. Even the mix is excellent. The recording is maybe a little less compact than on “Goremassacre Perversity” but still way cleaner than the earliest works. But what’s good, the clearer sound does not really impact the sewage barabarity of their music. The drummer is still one of the heaviest weights in the biz, able to pummel the skins like few else. I noticed a few metallic extra dissonant melodies in the mix, which were really not needed, but it’s good to hear the black flame is alive.

Cannot tell much about the missing lyrics, but the song titles sound sick enough, while non exquiste pathological fantasy as in the beginning. They seem to follow the leads of the previous “Necroholocaust”. Overally speaking this is good shit, still extremely complex gore-death-grind if with some quite geeky keyboard exploites which do not fit the place at all. Surely at the same level as the third album, and we’re talking about big standards here. The closing song is a jewel, go for it if you should listen to one song only.