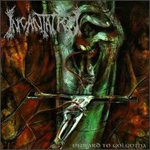 It might sounds as if it doesn’t make sense to buy a record you already have on both vinyl and Cd. But this special edition Relapse re-release of “Onward to Golgotha” was really impossible to miss. Things have been done in great style as with all these recent incredible exhumations of jewels such as the Disembowelment box and the Repulsion double Cd. Something just clicked in my damaged brain when I saw this on Relapse’s store website and well, I had to have it. Except for the HUGE typo in the booklet (“Profination” in big silver fonts??), the release is extremely accurate: the booklet is similar to the original one except for some Pantone silver colors, with added hi-res pictures and the jewel case holds this additional DVD disc. But hey, everything is absorbed by the spectacular cover by Miran Kim, a real fucking masterpiece of art. This painting really drags you in a vortex of madness. As said this 15 year anniversary edition of “Onward to Golgotha” (holy shit, already 15 years!) comes with a bonus DVD picturing three great shows with the McEntee/Deo/Roe/Pillard line up.