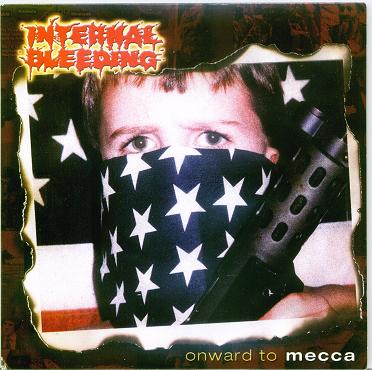 First of all, the title of the album and the cover art are fabolous. I totally share their view. My balls are quite full of this racist scum terrorizing the world. And even more I am full of hearing that the Western Word is the only responsible for their behaviour. Hundreds of years of civilization and all they produced is superstition and kilometers of barren desert wastelands. These shits have to be eradicated from the world, and if the H-bomb that is meant to do that has the colors of blue red and white, so be it. But let’s not digress, Nuclear Abominations is not a political webzine. It is about gore, deformities and sickness. Fuck.

The layout and graphics are not stellar for a label like Olympic but the job is well done and amateur errors are missing altogether this time. I don’t like the choice of colors and the yellow glow/embossing on the logo but that’s how it is today.

Hearing Internal Bleeding without Chris Pervelis is indeed very strange, but I admit the riffs are still solid, chugging, 100% NY slam. I wonder how much of Chris did flow through the recording this album – except for the acknowledged part at the end of “This Day I Fight”.  What’s undeniable is that the musicwriting here is one score better than anything I heard on Entorturement or 420 – both band were maybe too unripe at the time they were releasing their demos. Who knows, point is, this album takes everything these guys recorded before by the balls and shake. One should not forget that Internal Bleeding is over 15 years old, and it was one of the very first bands to start the NY style slam shit. So don’t annoy me with shit like “unoriginality”. A bit of guilt maybe they have, since this is a genre which is extremely dangerous to play, the line between a solid mosh indicung massive riff and a tarantella is blurry. Lots of young bands are now playing very, very boring monkey-core-metal trying to follow these steps. But Internal Bleeding always did it quite well, and despite some recording difficulties, I did like early Internal Bleeding as well. Expecially with Frank Rini on vocals (someone told me he’s a policeman today. Ah.). And still today they are able to crush bones.

“Onward to Mecca”, as said before, is still focused blindfoldly on the single rock solid stop and go riff, with huge guitar sound and shit. And I cannot really tell any weak points. This record is steeled in an armor of brutal chugs and boulder heavy chords. The music flows well and sometimes Pyrexia (more) or Dying Fetus (less) really spring to mind, and I think the vocals are the only slightly weaker spot. I think hard-core screams can be an extremely powerful weapon, if the tone is right, but these vocals seem more agony moans than pissed off spews. The recording, for the first time ever, sounds real powerful and beefy, it was really time we could hear this band with its rightful sound.

For fans of NY slam chugs blam blam metal I think this album stands well on top of your shopping list. Good shite. “It’s time to pay, it’s time to die. This is The American Fury”.