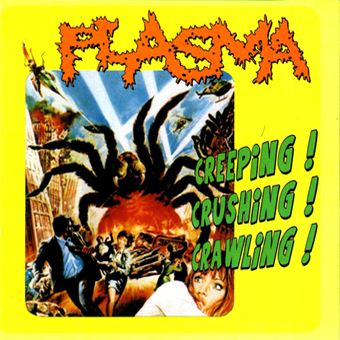 Wow, this Cd looks really nice, this is the best layout work I have ever seen on a Bizarre Leprous release. The layout has been built on the concept of atomic-robot monsters films of the 50-60’s such as tose of Plan 9 and it looks really spectacular. I guess that’s what many Razorback releases also want to look like. Actually the booklet is really bare (no lyric, no pics etc.) but it’s effective.

Roman doesn’t really deserve to get free publicity on my fanzine since he’s been promising to send a promo of this Cd for months and in the end I had to buy it on a distro stand – but this Cd is soooo good I am reviewing it anyway. But labels consider spending 2 euros for sending a promo for some exposure that maybe could result in selling some extra of your releases, damn. It’s the cheapest advertisement you could ever get. Sell one Cd from yor store thanks to a good review and you are getting back the shipping costs 3 times. Isn’t it simple?

Anyway back on Plasma. I have always been a big Plasma fan and seeing them live was a refreshing bath of bile. They’re among the purest, sludgier, dirtiest bulldozing grind gore you get in Germany today. The style is totally German (1-2 tempos and toilet flush vocals), but absolutely not boring. A solid recording and a lot of clearly distinguishable riffs make this album one of the best out this year. I couldn’t get how heavy it is on the car stereo, I had to put headphones on at home to really appreciate it’s slimy heaviness. Great watery vocals and mosh pit chugs makes the experience real neat. Not very original per se but at least we have some good replacement for Bitch Infection, Gut and CBT which lost some shine with time. And this time we got a real drummer as well, goddammit. Ground stomping vulgar shit of the best kind.