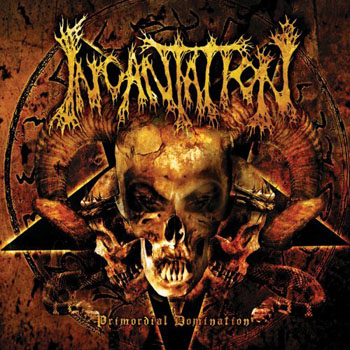 I think we all would agree if I dare to say that John McEntee has listened to a LOT of Autopsy before writing “Primordial Domination”, which is fine by me since it was the best band ever in the Death Metal universe. I still write New York is the base for this band although they have moved to Cleveland several years ago – and then NJ or Johnstown or Grove City, I lost track there are three different addresses here. The asset is the same that gave us the previous masterpieces of old School Metal of Death: John at the guitar and Kyle on drums plus random bassist (this time the big guy called Joe Lombard which also writes the majority of lyrics) – and their adopted fifth member the producer Bill Korecky. This is not the first Incantation album with John on vocals but it’s the first one I manage to listen and dissect carefully. I haven’t really listened much to “Decimate Christendom” or the horribly looking “Blasphemy”. I can surely say the vocals are absolutely okay, not as deep as Pillard’s or Rhamer’s but more in the vein of Corchado, still more than okay in the studios even if not impossibly dark (but they are very weak on stage). Everything however really falls in the background in importance when this guy works his magic on the guitar. He’s the best motherfucking guitar player around when it comes to spewing Death Metal anthems. I have the obsessive malignant vibes of “Mortal Throne of Nazarene” and “Diabolical Summoning” still chilling my skin every time I think about those albums, even if it’s probably over one year I haven’t listened to them. I have to say however that while theoretically perfect, and chock full of killer riffs and spells of unholiness, not to mention Autopsy worshiping moments, this album is not as majestic and eerie as it could be. It’s a bit like when “Infernal Storm” came out, an album which I cannot say I dislike, but I cannot say I love either. It’s just so difficult to challenge those two albums I mentioned before that things sometimes just don’t manage to reach the same level of intensity. I love this album anyway, but I cannot define it a masterpiece. All the good Incantation elements are present here, and not only in the line up: unholy growls and pure Death Metal riffs with that minimal dose of evil doom, you cannot really make a mistake when it comes to Incantation. Yet I will still rotate the first three albums in my Cd player. Listenable is doing a good thing with packaging – the artwork is by the excellent Jacek Wisniewski (I still prefer Miran Kim, tho) and there is a cool DVD extra in the case with a show from France. It’s appalling to hear how terrible John’s vocals sound live, they really lack any punch… too bad becouse the picture is killer.