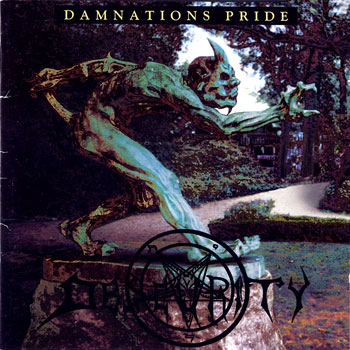 Scarlet records is not my favorite label of all time. Well actually I couldn’t tell on top of my head one band one in their roster which I like at all. But the man behind the label deserves some respect for his solid backgroud in extreme metal since at least the late eighties, and part of this background is finally showing on this jewel – an anthology of Obscurity recordings from 85 to 87 – and 1992. Considering the time when these songs were written, it’s quite clear that this was one of the very first Swedish Death Metal bands of all time (as by the way Daniel Ekeroth confirms on his book on the subject). The Cd is however not pure gold from start to finish to be honest. The two tracks recorded in 1992 are among the most boring examples of warped Venom inspired music I can think of, but that is probably Jorgen Lindhe starting to write riffs that whould stem into is subsequent (atrocious) band Flegma. What makes the Cd so impossible to miss, though, are the two demos that To The Death records also released on 7″ slightly before. If you can, you should get those, but if you prefer the Cd format (shame on you), this Cd has it all. The first demo is high quality Speed Core/Thrash-Metal heavily into Celtic Frost/Hellhammer on speed, with patterns that remind me a bit of a slower Suicidal Tendencies/Cryptic Slaughter. The Death Metal seed is not impossibly heavy on these tracks – but some real neat ideas appear here as well. But the real shit is the second demo, which also opens the Cd like a gate to Hela’s domain. Four tracks of blistering killer Death Metal which cannot but remind of early Merciless (which btw came a bit later) in pure ferocity. Also killer acts like Imperator or Sadus can be taken into account, the vocals are twisted, the guitar shords pure Thrash Metal in your face crunch. This shit alone would be worth a full fucking 9-score vote. Great riffing, hammering drum blasting, energy-ripping vocals. I cannot tell how much I love this hybrid form of early Death Metal. The last song “Demented” is a real surge of crushing Metal riffs, with a delightful Slayerish solo in the middle. The whole Cd is worth just for these 4 tracks. Monster band. Not standard Swedish Death with super tuned down guitars, but great headbanging fun!

While the demos are amazing music to hear, the Cd itself is not done really well (we have high standards today thanks to Nuclear War Now!), there are no liner notes, the pictures are just 3 or 4, and there are no flyers, interviews, whatever. The cover art is too dark and grainy, the logo disappears in the shadow of the statue, and it is just too damn glossy. Only good thing is at least there are all the lyrics inside. Better than nothing. Well better than what Xtreem is doing with anthologies at least.