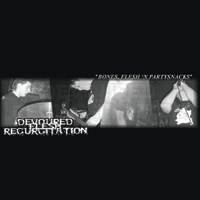 I was complaining right the other day about the seemigly complete lack of serious goregrind bands with a real fucking line up and not just drum machine and computer bases. Luckily Grindhead from Australia has come in aid, as this Devoured Flesh Regurgitation album is just that, a real grindgore record with real musician, that took over 4 years in the making. It just feels reassuring that it was ot made overnight like so many releases today.

I actually hate the shouted punk vocals on this album, a la “old English way of early grindcore”, not becouse they’re not deep or whatever, but they just sound a bit fake in the mix – so to say out of place. Seems like someone just took an album that was already complete and mixed, and added some barking with a walkman. In other words I really believe they’re totally superfluous, get rid of that shit. BUT! This band has a double vocal approach (just like old ENT) and the second one is our beloved more reassuring, traditional octaved gargle of early RGTE and old Malignant Tumour. Soundwise the inspirations are many, from crust to more traditional grindcore with a lot of blasts and the classick touch of punk induced groove plus a bit of the blur of early noise bands like Sore Throat.  I really like it when all the instruments converge to a point where all the fury is unleashed in a wall of sound crowned with froglike croaks. Luckily we have something sick to listen to this time and age. There is not that excess of R’n’R groove that is abounding too much lately into grid in my opinion, and that’s another good point. We’re a bit far from the impossible damp heaviness of Last Days of Humanity and early Squash Bowels, but we’reon the right way. To get and support! The band split up in 2006, too bad!

Neat work with the packaging this time, the label is improving release after release. I would have skipped the embossing on the fonts, tho.

PS: Actually the vocals were really recorded later than the instruments.