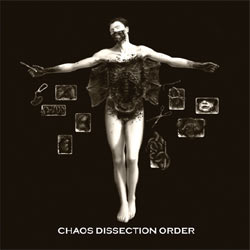 After two years of delay, “Chaos, Dissection, Order” is finally out, third goddamned blasting piece of bulldozing goregrind from Holland. Actually usig the term goregrind in its common meaning is a bit restrictive. Inhume are extremely HEAVY, and surely grind as well, the guitars are loose and rocking although not in the classic Neuropathia way. There is more heaviness and no groove here, which in the ened I believe is for the better. The sound is accurately balanced,every element well cut in the mix and the guitar sound boulderish but not dirty. It’s like the heaviest you can go without a muddled sound. The drum stile is the same as in the killer “Decomposing from the Inside” but as it happened with “In For The Kill”, things have gotten even tighter here. There are just a couple of tempo variations in the middle of the album, but for the rest it’s ultra fast blasting all the time, with early Mick Harris like bursts but without all the socio-political bollocks of classic grind. Fully graphic gore lyrics and artwork, double guttural vocal assault, and a ultra-dense sound make this new Inhume hit another mallet strike right in the middle of the forehead of Jesus. Ah. There is not much digression here, everything is to the point without fucking frills. Inhume is still one of the leading Brutal Goregrind bands from Holland, bar none. I guess one has to be more into the second album than the first but hey, is this a fucking problem? If you manage to see them live, they’re also a great band on stage (not to mention there is a red haired girl with impossibly big tits always following them on tour, so that’s one extra point in my scale of values. Eheh.).