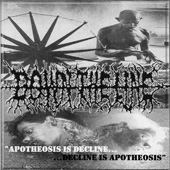 It is fun to read how prolific and compact the scene from Sardinia is. I was first introduced to Sardinian grind with my long time friend Wally ‘s band Ass Ache still in the 80’s (!!) and then with a bunch of other bands which appeared in the “Ugo Story” compilation tapes. Let’s tell it straight: this Cd is just made up of 5 minutes of real music plus a bulk of intros and a very long (and a bit sleepy) concatenation of electronic loops. But those 5 minutes of real shit are intense enough to raise a brow. Very few, extremely basic crusty riffs with a bit of Agathocles feeling, coupled with unintelligible liquid vocals in pure gore-grind style. I especially like the metallic sound of the bass distortion. In short this is genuine dirty to the point goregrind with some courageous experimentations in the electronic field. I just wonder why they’re still promoting 5 scarce minutes of material which were recorded 5 years ago (!!) and released only 2 years later. Songs like these are generally mass produced by the dozens – one riff, one song. The cover art is okay too, even if it spots a photo which was already used on Meat Shits‘ “Sniper at the Fag Parade”. Not a mandatory “demo” but fun.