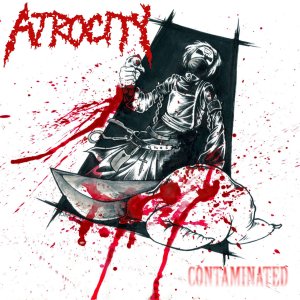 Hey! This is indeed a welcome surprise. I was not sure if this was the same Atrocity from Connecticut that I knew, but aquick glimpse at the logo and my doubt disappeared. I have known this band since the self-produced 7″ recorded on Hogbitch something like 18 years ago, I thought the world entire forgot about them! I was indeed curious to know what happened to these guys, but I quickly lost all hope. While the two records were well distributed here in Italy (they ended up in almost every 2nd hand vinyl store in the country – grindcore was never a big thing), I really do not remember of having read many interviews or news in underground publications. It just seemed to be one of those bands which just hover at the borders of the scene. A pity indeed becouse the grindcore they produced was of quite neat quality.

So. The band is back. But before concentrating on new material the guys from Torrington have decided to rehearse some old songs and update the form to year 2007. Well… we have been lucky. No overproduction, no trendy emo dissonance, no cheap aggro metal riffs. Atrocity has returned in terrific shape. They got the good taste of not washing the sound at all. The trademark classy vocals and raspy guitar sound are all here. If one looks for South American noisecore I am afraid this band could seem a bit outdated, or maybe not too fast, but I think it’s the sublime commistion of two genres going hand in hand that makes this new stuff brilliant and fresher than ever. The vocal style is reminiscent of fucking Terrorizer/Nausea and even early Morbid Angel if you know what I mean. Great shit, distorted but powerful. They might have no impossible all out blasts but the riffs are powerful in their simplicity especially when the guitar sound reminds so much of Sadus‘ “Illusions” (well, to my ears at least). Good grind/death from the past, the main flaw is that it is too short, I really need more from this band – hopefully we could hear some brand new tracks soon! Good to see the lyrics have been reported in the booklet, they are standard antisocial grindcore lyrics but worth a read.

The packaging is also quite bare but very clean and stilys, must be the best one I have seen so far from Open Grave. Besides, support the label and buy this Ep, they are doing a good job and are very active despite the relatively young age!