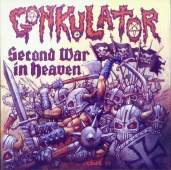 Whoa! Gonkulator is a band that makes Revenge sound as polished as Oasis. No kidding, I seriously doubt you can find something as filthy and unrefined as this band – it should not surprise Charlie also plays in a band generally associated to punk/grind sonorities. For unrefined I do not mean just badly recorded as in early Burzum or Striborg – as if someone poured water on the speakers – nay, that’s filthy but also weak. Gonkulator is filthy to the core, as if GG Allin tried to play Black Metal with a cheese grater. With all this shit going on, how could one not like them? You must be open to really bad production and extremely basic music writing, but I personally found this Ep entertaining. Drumming is just little more than violent beating, and the riffs just a noisy scattering of chords, but hey man, the spirit is alive here. The vocals are a bit too filtered maybe, but they just blend to perfection in the chaos vortex that crackle and fizzles all beneath. I really don’t know how much tongue-in-cheek humor there is in Gonkulator, but they’re among the coolest Black Metal bands around these days, just crazy and chaotic, and uncontrolled like the art of the Devil should be. Too bad it’s several years I don’t hear of them. The packaging is decent to my appeal, and includes a good fold out artwork by Scott Lewis. All in all super cool shit. Respect!