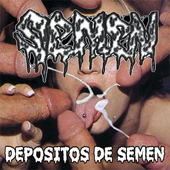 This new Semen Cd I got from Half Life stuck me real hard. It’s a fantastic example of real goregrind the kind that seem to have disappeared in the last few years, with all that huge hedgepodge of mid paced cyber-bedroom projects. It’s really relieving to hear once more real grind shit, without super productions a la Nasum and shit like that Semen plays down to earth goregrind, and plays it with real fucking instruments and no fucking harmonizers or other shit – just plain gore porn hysteria. The riffs are not really bone crushing but the general sound is so sick and putrid that you can really go over it. The vocals are deep and gurgling, and the whole recording so dirty you can hear crackling all the time due to the poor sewage bintage recording that however manage to keep the sound full and powerful. Just like goregrind used to be you know, very early Malignant Tumour and stuff. The layout of this album doesn’t really shine, but stays in tune with the general goregrind attitude, a bunch of lesbians and cum filled cunts, and a scattering of terrible fonts butchered with tons of cheap filters. Disgusting and sincere, I really like this stuff.