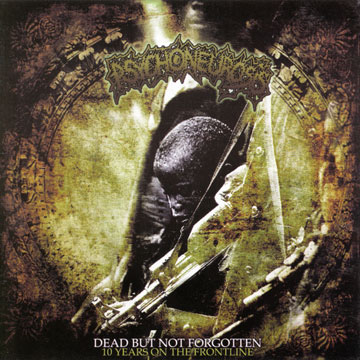 Ah!! It took me some minutes to actually realize this Psychoneurosis is the same band that released a 7″ with Brutal Insanity back in ’00 (I figured the logo was familiar, though!). This Cd is a complete discography of this “cult” grindcore band from Poland, not an extremely old one (their earliest stuff is just from ’92 even though the band was formed in 1991) but it seems it was quite prolific and respected during its lifespan. Musically, we’re talking about grindcore in its very broad sense. The music is not as noisy and disharmonic as early Napalm Death or Heresy – the first tracks sound very, very Thrash Metal oriented to me, gently sloping to a contaminated brand of grind that gets blended with punk and some average quality metal. As the discography goes on, you get all kind of recordings taken from splits, tapes and live shows – including some recording of trmolous quality – but that’s quite normal, I believe. The vocals of this band are generally a sort of muffled grunt, a bit in the vein of Nausea, Extreme Noise Terror, Violent Headache etc, even though the Donald Duck “high” screams that burst in at times are really fucking horrendous and terribly stupid, you could as well get a good song without those retarded “laa laa laa”. Fucking unbearable. As the singer changes and the Cd progresses, we have even vocals that remind me of Celtic Frost (?), go figure – but the drum blasts become even more chaotic and tight.

In general I like the freshness and spontaneous simplicity of this primitive brand of grind, with its basic riffs and occasional bursts, but I admit it honsetly lacks some energy when compared to Swedish and Finnish bands from the same period – not to mention the pure filth of South America. I have enjoyed going through the whole Cd for historical reasons, but I admit I’d probably put the new Bombstrike Cd from Power it Up instead next time I need some “grind”. Straight 7 for honesty and the nice packaging that includes cover artworks, discography, bio, and a nice big collage.