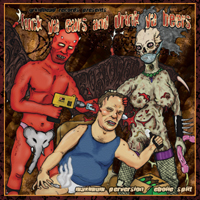 Ok, Ebolie’s at the same time better and worse than Maximum Perversion for my ears. That happens when a band is so varied. I have appreciated the goreripping bursts of energy and these guys definitely know how to maintain the same level of quality all through the record, but sometimes the funky bass slapping and small in-song talk get a bit annoying. But I guess you cannot do anything for that, when one artist feels like inserting this shit in a song to create variety you have to give up ah ah!
Honestly speaking Ebolie has gotten better and better with time, with some arrangements and ideas that are nicely unpredictable. Lots of different stuff going on, but with some serious chemistry. Influences from drone to math-grind just stain the whole songwriting all across the tracks. I am not one to appreciate innovation but these guys know how to do that in a very un-trendy way. Their former lack of punch finally solidified in something more than concrete – tenacity finally rewarded Ebolie. Pretty much interesting stuff.