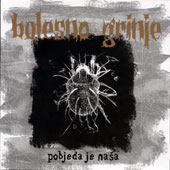 I am not 100% sure about the release date of this album, but it says it was recorded in April 2002, hence I guess it was released the same year. That makes it three years older than “Od Nesvijesti Do Grinda”. The music is however not extremely different. We still have fairly political oriented grindcore with rough, drunk vocals a la Extreme Noise Terror/Concrete Sox/Nausea etc., groovy riffs, and a couple of close up pictures of fleas on the booklet. This time the cover looks even more deluxe with the use of this gold pantone color, I like the way it turned out. The lyrics are not extremely readable but that’s part of the design that wants them on the same line. I can just repeat my appreciation like I did for the other album: this music has the constant crusty swing which is fundamental for fun-enjoying grind, this must be excellent to see on stage. There are some attempts at using dissonant vibes which have been dropped on the newer stuff, but they were really not fundamental. The overall sound seems even a bit fatter here, with some added bass distortion and a strong metallic bass backbone. We’re far from minimalist though, the sound is clear and the guitar riffs diverse, more oriented towards the pure mosh. Hmm. Not much to add, get this if you liked the other one, can’t say much more. This is good honest groovy grind.