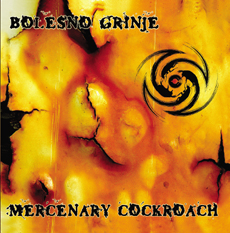 Never in a million years I would have guessed that a band with a shitty loser name like this would be this good. They are a fucking bulldozer of a band with a sound that initially reminded me of Extinction of Mankind and Self Hate. Powerful, in your face bulldozer grindcore with ultra fat, sinewy, bulging sound and super deep vocals. And have a listen to the drummer, a non stop machine. And what about the solos (!!!), even the solos are good in an almost Morbid Angelesque way. Hell yes, I am nuts but all this brutality blends flawlessly with its simplicity. There are no million metal riffs, just cut throat blasting, guttural growls and this metallic wrapping sound. And for some reason it doesn’t sound metal at all, which is good in a weird way. I must say I have fallen in love with this band, I just wish it had some skulls in their logo and some guts on the cover artwork, sigh! But you know how it is with Eastern Europe, they have to make fun of everything, I guess it must have been all that gray, humorless communism they went through.

Seriously speaking this band KICK SOME SERIOUS ASSES. Once picked out two or three weak tarantellas in the whole side, the rest is untainted brutality without frills and embellishments. We need more bands with this linear approach to grindcore. It might be a bot too clean for some palates but other than that they shred. Very recommended. Just cross your fingers that one day they will change name!