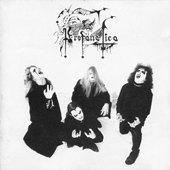 Profanatica was one of my favourite Black Metal bands when it was becoming a solid enstabilished genre per se, with its aesthetics and stuff, and the fact they came from a district of New York just made the thing for me all the better. I feel really annoyed by Scandinavian Black Metal, however you call it. This band originally formed out of a very early version of Incantation when both Ledney and McEntee left Revenant (if you want to hear the other bands which came before this: Contrivisti and Toten, check out the excellent – as usual – retrospective on Nuclear War Now!) or as Ledney put it, when John left the band and took the name with himself. Whatever the case, it seems their friendship must have been deteriorating afterwards becouse McEntee is on the first line in the thankslist of this “…Tormenting Holy Flesh…” split album. Profanatica is quite atypical for the modern interpretation of the Black Metal band, for several reasons. The riffs of their songs were not just constrant buzzing tremolos a la Immortal & Co. but you can call them riffs old school Death/Black with Doom laden bridges and powerful twists, there is even one small touch of the early Incantation here, when I really like the guitars, the impossibly bad recording and shrieking vocals just don’t annoy me so much, on the contrary, I am pleased by the total garage sound, it really reeks evil like the worse south American recording and the malignity just results heightened. Ledney here handles both drums and vocals (like Nocturnus or Autopsy) and I believe he does a good job at both things. His screams are a blasphemous agony, not your ridicolous typical popeye Scandinavian-style shout, I really picked this out becouse some resemblances to Messiah which I reviewed yesterday might not be totally out of place, when we talk about the slower grinding sections. Track 1 is the only new song here, as both “Final Hour of Christ” and “Weeping in Heaven” previously appeared in other works, and the 8 minute “I Arose” is just a fucking evocative instrumental masterpiece. No really this stuff is so neat I am not afraid to say I like it more than 99% of today’s Black Metal (there are exceptions, but you get my point), this is what I mean for Black Metal, not paper penguins. I don’t care much for the panda corpsepaint but seens it’s a must have for any so called satanic band (bah). Profanatica was really, really direct and sick in their blasphemy. I have seen a video of these guys playing naked and smeared with blood on stage, masturbating on the bible, smashing a virgin mary statue stained with blood on stage, spitting urine at the crowd, they were really, really nasty and disgusting, trying to break all of jesus christ’s rules not just by writing lyrics in their flats but also by acting disgusting and against the laws of nature (a bit like G.G. Allin). I haven’t heard anything since their reunion (except for the collection picLp but that’s all old stuff) so I can’t tell if things changed for the best or stayed so primeval, you should check Hell’s Headbangers website often to stay informed. I have compared both vinyl and Cd versions of this split and I haven’t found any differences. There was a flyer insert withing the Lp cover however where Osmose was sponsoring the “The Raping of Virgin Mary” unreleased album, ah. I don’t know if there was a mistake on the flyer but what was to become the cover of this split was instead placed as the cover for that never released album. Blasphemous and totally crude the way this is meant to be, once again! Fuck polished sound!