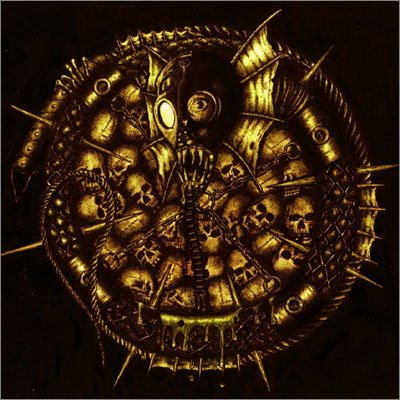 Well. Even if I have an inborn intolerance for 3 way splits (nothing more annoying to place in your collection cabinet… I am always undecided whether to open a new row for 3 way splits or just place them among other compilations… not to mention how to write them in a list! Ah these are real problems-…ah ah!) this might as well be the best release of the year. All three bands from japan, all three playing personal variations of totally ground digging hyper-deep doom death a la Winter, Disembowelment and Autopsy. Starting out with Japan’s best band today Anatomia, with their unparalleled class, elegance and flawless ability to weave webs of dark terror and freezing cold asphyxiation. Pure classic Death Metal, played so fucking good I got thrown back 20 years, as I could feel all the vibrating magic this stuff used to have at the beginning of the genre. Everything is just perfect with Anatomia: all songs are classics with immense riffs, crushing guitar sound, powerful and sick vocals, you just have it all, I really cannot add anything to that. They just have “it”. Grudge could have easily stood the hardy test of following such a powerful band, if it was playing strictly instrumental tracks. There is little space for vocals in these tracks, but this little that gets through is really disastrous. The idiot that sings on these tracks sounds as if he got an emphysema. These are possibly among the worse vocals that ever existed. Seems like hearing Dave Ingram in “The Dreams You Dread” or Barney in “Diatribes”, but after a throat surgery. So incredibly ludicrous… what the fuck?? Despite this weak spit however these riffs are really crushing, and luckily take up 98% of the running time. Grudge has a damn dirty sound, which sounds perfectly fitting with these crudely carved riffs of ton-heavy saturated death. I have a few 7″ by them (mostly for the bands they shared splits with I admit) but didn’t remember they sounded so good. Coffins have also been a recent addition to the celestial bureaucracy of Japanese Death Metal, but they have already established a name in my playlist as one of the best bands around today. They sound like a less refined and perfected version of Anatomia, with crude, tape-like sound but still overly bass-saturated sound which is good for this stuff, damn yesh, definitely good. Dark and deep, a vortex of black sludge swallowing the light of the sun. If we replaced Grudge with Catasexual Urge Motivation this could maybe have been the ultimate 3 way.

I am not impressed by the cover art and layout 100% but no shit – this is super professional and original. Easily not only the best Grindmind release so far (this label is getting better and better each month, watch out for its world conquest!) but definitely one of the 5 best releases of the last year. Amazing.

PS: Someone shot Grudge‘s singer in the face please!