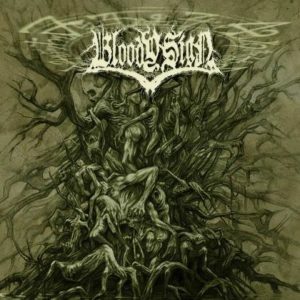 Wow. This Bloody Sign might not be a band that needs introductions, but it’s surely worth underlining from the beginning how damn mindblowing they are. Kilometers far from today’s opposing standards of “dark old school” and “brutal new school”, this is a band which “didn’t not surprise me to check they released a split on Nihilistic Holocaust“. As you might have guessed, the line follows from where the first album “Vana Vigala Loïts” ended, still knee deep in classic high level Death Metal that oscillates between South American warfare (Imperious Malevolence, Masacre etc) and Morbid Angelesque high-level writing (Ingurgitating Oblivion, Impureza, Act of Gods, Centurian, Serpents’ Aeon etc).

The songwriting is really impeccable, with plenty of that Floridian muscle we have started to forget about. I am not into 100% of the mid tempo bridges (a bit in the vein of old Morgoth maybe, even though the vocals are not that great – heck!), but it’s the the fast parts that are are something really worth hearing – amazing solos and intricate multi layered riffs, throat ripping vocals, granite solid drumming. This is a really impressive work of old fashioned professional level Death Metal like you rarely hear today.

Like I said I am not really 100% into it, mostly because the songs seem a bit lacking of precise personality at times, some riffs could have possibly been dropped (my friends in Kaamos told me they dropped dozens of riffs before getting to studio, and it’s something that generally pays in my opinion), but this is just a cheap comment from a critic that might not be worth considering (didn’t they say the same of Mozart?). The good work on this album however is much, and definitely enough to blast my personal rating quite high. I’m with this band completely, seems like the French scene is really giving birth to new killer bands lately.

Another thing worth saying is that all these songs are 4-5 minutes long. It’s not that common nowadays I think. You finally have the impression of buy a full length Cd, and not a 20 minute demo for the same price. All this to say this is a band that needs careful attention. They’re good musicians, with plenty of taste, dedication and vision. I am loom forward to hear a fast-only album!

I found the original cover artwork on the Internet and I cannot but say I am pretty much disappointed to see how this superb work was butchered by a mediocre Photoshop trick across the logo and a really muddy, dark print. The picture here is not how the real cover looks like, but how it should have. It is so dark you lose much of the detail and shading effect. Too bad really.