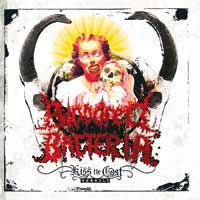 Okay, this time I prefer not to read anything about this new release before actually hearing it from start to finish. I remember this is the band who also released a split with Abscess some years ago and according to Power It Up‘s info sheet it’s a collection of Bloodred Bacteria singles. I am not hugely versed on this kind of  new grind core, but it seems to be a genre immensely popular in Germany, eastern European countries and in the far north. I personally never got big into it, and according to the sales of my shop back in the days, it doesn’t seem to stick very much in Italy. Maybe I didn’t push it enough… whatever.

The label is doing a good job with reissues in general, starting from a nice packaging with full lyrics and a couple of meaningless drawings, to a careful re mixing of these old songs for an even, better balanced sound. I lost myself halfway in the lyrics, some sort of generic rant that goes from moaning about how liberalism is bad and generic fun stuff. This definitely not the kind of lyrics that stick in the head like Fugazi‘s or Minor Threat if I must be honest. Also I would consider them a little more if they came from a Chilean band, instead of Germany.

From the musical standpoint, the Cd starts out a bit slow. Mostly that boring brand of run of the mill grind you can find on that big box of 7″ with nonsense covers you always find in average punk gigs. You know, the one sold by that guy with the army cap with Warsore patches, yellowish vegan skin and that brand new Driller Killer shirt. However even with the worst cynicism I admit there is good shit in the remaining half of this collection, though. The band seems to have gained some awareness somewhere in 2003-2004 starting out with the Swarrm split (that one is a great band by the way). The vocals are kinda strange, they are not particularly extreme, but their use of multi-layered recordings make them quite personal. The guitarwork has become more contorted without falling in that mathcore shit, but also not purely derivative of Discharge either. I must say there is some personality in this work. What seems to lack however is a good punch. The chemistry seems to have stalled to good levels, but none of these songs gave me even a fair shake. Mostly fast chugs and repetitive shouting. Could be a good choice for those into generic grind, I personally found it quite avoidable.