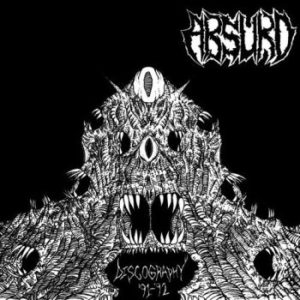 Ahhhh! When Nuclear Abominations first became a webzine in 1999, one of the most boring things to do was scanning covers. It was outrageously boring shit, yet it was cool at the same time since it was difficult to see underground record covers, especially when we talk about very old releases. Am I complaining like an old sailor here? Hell no! All I had to do this time was just Google-ing the name of this compilation and, like magic, here is the cover. Man, these are really great times for lazy fucks like me. I wouldn’t even have to open the Cd, I could just listen to this on YouTube. Couldn’t I?

Considering I am not some high profile psychologist nor a hermit swelling in its own thoughts, I am not going to ponder the reason why I still do buy records sometimes. I haven’t really thought much about it but like I always did for music-related stuff, I just go with the feelings I have at the moment. That’s why I never learned to play an instrument I guess. Whatever the case I was intrigued to hear this retrospective. Obviously, I had listened to the  main recording that make up this collection before, namely the 1991 demo tape later repressed on 7″ on Seraphic Decay (mine is on trippy pink paper cover, combined to the abstract design it was quite a nice psychotropic experience), but I never had the chance to hear Absurd live before. Obviously we’re not talking about the German NSM band (I omit the B on purpose here), but one of the small underground Swedish bands that played in Sweden in the earlier days of this form of music. They were from a small town just north of Stockholm (Täby, same town as Treblinka)  for what I see, and well, you cannot really go too wrong with a 1991 band recording a demo at the Sunlight Studios at the time can you?

Before going on the the release itself, I’ll gladly spend a good word or two on the label: Black Vomit (from Greece) is the same label that released that Necro Schizma compilation we saw some 10 years now (IIRC it was From Beyond that released it) on wax, and – thank you Satan my lord – it has been released on super standard black vinyl with an super standard, bare packaging – enough with huge boxed sets spilling patches and pins from every corner. While I am a Necro Schizma fan and I did get the record as soon as I saw it, I have n0t bought their Genocidio vinyl yet but I plan to do it sometime in the not too far future. I have that old Ep of them and a more recent Cd from the early nineties (“Hoctaedrom”, how did it end on the local pop music store is a mystery) and I liked that stuff pretty much: good brutal sound without too much gloss.  Together with this Cd I also got the Necroccultus / Sub Niggurath split, which is also killer. Good work man. Support this label.

Now on this proper Aburd release. One big “thank you” for not using the bakery shop logo they got on the Seraphic Decay Ep, I am pretty happy with this one. Thank you also for keeping it lineart black and white, please somebody tell every label doing reissues today that this is the ONLY way to go. I learned from the interview repressed in the booklet taken from the Return of Swedish Dodsmetall that the band used to change logo continuously (more or less like Nun Slaughter?) so the one we saw on cover is probably just one of them According to the ex-Espulsion guy Christopher Wowden, the band (but I can read “him” between the lines) was not fond of classic Death Metal logos so my guess is the logo chosen and the cover we see here is probably not what the band would have used at the time. Have a read at the interview if you don’t have Nicola’s book because it’s quite interesting.  In conclusion, Absurd wanted to be progressive but the Cd came out way more similar to a old school Death Metal release than 80% of the retrospective I see these days. All in all, I am happy with this choice.

So what do these Absurd sound like? Well I am talking about the 3-trax demo here, because the live show, while interesting (there’s also a Pungent Stench cover), doesn’t exactly convey all the down-tuned, spectral sound of the band. I could dare to say sometimes the band has that slightly Crematory-ish semi-melodic vibe in the background, but all in all it’s Swedish Death metal. Highly structured, with a lot of tempo changes and blast beats, but Swedish Death to the core, hell yes. The vocals are not just the hyper-deep kind, and even have some metallic effect on the third track “See Through Me”. This last song definitely needs some extra attention because it has a lot of structure. I really like when bands attempted to experiment a bit while keeping it brutal (think Demilich or Crematory). It goes all through the spectrum of mid tempos and blasts but the choice of riffs and malevolent tremolos is something that could only come from 1990 Sweden. I have plugged off from the world for a few years but I am curious to see if any more recent band can capture this feel.

Good shit, get the Cd even for the three studio tracks if you don’t have the Seraphic Decay Ep. One single complain I could say is there is really little info except for a pretty regular collage and the aforementioned interview. I guess I would have liked a repress of the demo thank-list or some other extra information on the recordings, but after all you can excerpt the necessary info from the interview, so no big deal.