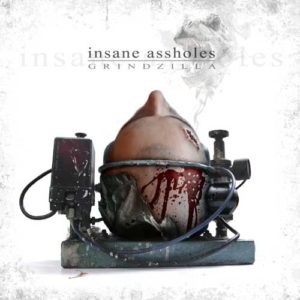 Preface: This is a review I begun to write in 2007, so do not bother to write it’s an old album, I know it’s an old album, and yes I am a human shit for not having reviewed it when the band actually needed it, but hey, I was just at war with myself at the time eh eh. Stay tuned because you’ll see a lot of old shit in the near future. It might as well be some bands have disbanded in the meantime. In any case I have two crates full of old promos to review so just shut up and enjoy what I have to say now that nobody needs it, ah!

I’ll start right away by telling what I do not like about this release, and it’s, plainly, the not-so tongue-in-cheek-humor. I barely could bear Spazztic Blurr or AOD, go figure what I can think of a band with humorous lyrics 30 years later. There are no lyrics printed here, but the titles just need no great analysis. Thinking about it one can view the humorous approach a bit like that of cheezy genre movies like Blood Freak (the monster turkey movie) or classic Troma stuff but I’ll be honest, I am not a big fan of that kind of horror, preferring less happy gore demented stuff.

Setting rants aside, I’ll move on to what I actually like of this album, and for a start the layout is quite good. Sure, “run of the mill” vanilla Subordinate “neogrind” style, but you can’t say the packaging isn’t professionally done, with sharp lines and an all original artwork, so thumbs up for the presentation here. But please, lyrics next time.

I don’t understand why they decided not to feature this band on the Metal Archives as not only the crisp sound but the songs themselves seem pretty “metal” to me. Well, a lot metal actually. The backbone is definitely fucked up grindcore of course, and it has some frequent blastbeats as well, but everything just sound as metallic as it can get (hell there is even that Pantera guy who was shot on stage mentioned in the thanklist twice, can you dare to say they’re crusties?). Remove the freaked out vocals from the mix and just listen to the guitarwork and tell me what you think.

From start to end this album is relentless, pretty tight, and has a lot of consistence. With that I mean that there are no boring intermezzos and trippy shit (well, actually there is a humorous song called “Carbonara Groove”, and a modern black metal bridge towards the end, but we can forgive them) but just straight to the core songs which have one or two riffs apiece and this is an approach I generally appreciate. I think if you cut off all pauses between the songs and you can pass this whole album as a single track eh eh. Slow down it a bit and you get a pretty decent Death Metal album as well , I need to try that.

So to wrap up my opinion is a bit mixed, I like the no frills approach and the fucked up vocals (Bastard Saints could have been a strong influence here as the randomly scattered vocal style is quite characteristic on that band and the singer also appears as guest here) but I always preferred a more sick, rougher sound. I have a concept of grindcore which is quite far from this, something darker, borderline frightening, certainly not this metallic. This album is an honest display of fast Grind/Metal with a schizoid vocal dept and a sleazy horror movie backbone. Could be worse after all.