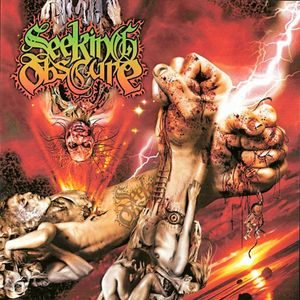 Please give me some minutes to recover from the extreme pain of watching this thing, because this is possibly the worse album I have seen in SEVERAL years. As for the music, hey I will not start spoling the fun here. Let’s just stick on the horrendous layout for a few seconds. First and foremost, the logo is only mediocre but succeeds in looking even worse with an effect of INNER shading, a shade that goes from GREEN to ORANGE. Did I forget to premise that this album is supposed to be a Death Metal album? After the summer ice cream poster color scheme, my eyes move on to the cover where an appalling work of computer tricks awkwardly glue together, in order: a pair of forearms with the logo (thus repeated twice) tattooed on, two tiny pixie feti, an upside down cadaver with crotch hair on the head and a sunset over a red sea plus random stitches, eyes and corpses. Now this is really something that could compete to the first pressing of Broken Hope’s “Swamped in Gore” (the almighty cover with the chessboard).

The greatest part of this layout however lies not on cover, nor on the multi-colored and multi-font inner spread with its amazing arrangement of graphic files with different hues of black and randomly placed corpses, but… the tray! I can’t describe this thing clearly enough, you have to see this thing: I haven’t mentioned it before, but this is a ONE MAN BAND. Just to make it clear that our Napoleon Dynamite rocker-edition is playing everything he took care to have pictures of himself playing all the instruments, subsequently arranging the photos close to the logos of the companies like he is getting an endorsement from Yamaha or Ibanez! Please note he has gloves when playing drums and a cap while playing guitar. Oh, what an clever trickster he is, what a sly deceiver! 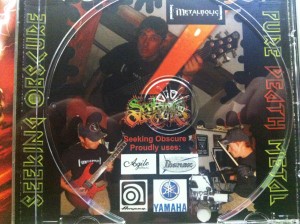 Please have a look at the fonts and the color of the spines! PURE DEATH METAL!

Having reached this point, NOT skipping Einstein quotes and statements of intent on how this one man band from Wyoming is going to contribute to the glorious history of Death Metal, I am now braced to hear it.

It starts out with George Carlin making clever statements on how ridiculous religion is. Not my idea on how to start a Death Metal album but let’s go on! Rob/Dynamite actually smashes all by playing his own kind of death metal in the same genuine vein of the Italian Metal college bands I heard when I was a teenager, with mid-atrocious tarantella tempos going on forever and flat vocals that just follow the same pace of the aimless (but technical!) chugging over and over. Not happy with this slab of sloppiness however, Rob/Dynamite is daring enough to make it even worse with some spine-chilling accelerations, merry epic metal melodies, keyboard sweeps, phone call samples and much more. I am impressed since all that should NOT be in a good Death Metal album is neatly arranged here for convenience save, apparently, for the drum machine,  (Rob takes pride in playing a real set!). The funny stuff is that this album even has a BARCODE and a punch-hole, just in case I was lucky enough to get some retard buy this thing for 1 euro you know. Man I haven’t finished to hear it once and I am already freaking out. Is there no end to the pain? He continuously manage to place arpeggios, epic guitar shreds with lyrics that could compete with Metallica’s incredibly aggressive radio track “Escape” and to top it off – a fucking KISS cover! This is a real masterpiece of not-awesomeness, goes straight between my demo tapes of Mototronko and Die!