Among the various albums I got for review lately this must certainly be the absolute worse. Basically everything in this album is wrong in my agenda, everything. Once I recovered from the shock of seeing this is not the Brazilian Gore (as I expected, my hopes were crushed by the cover art the very second I picked the Cd out of the envelope) it took me just a few seconds to stare at the Cd, a digipack so glossy it looks oily. You got a scattering of pictures about sexual perversion scattered on the layout going from dildos, latex-wrapped whores, blasphemous images of Jesus, streaks of blood and so on. Not only however the Cd doesn’t come with lyrics but the very titles of the songs are in broken English.

While the overall layout is harmonic and certainly a result of some professional designer  it is the music that is just tragically bad. G.O.R.E. plays a disastrous patchwork of death/grind with among the worse vocals I have ever heard since Caninus or Anael (eheh). The growls are little more than dog barks, and in a pitiful attempt to quote Macabre they even manage to make it worse with Mickey Mouse choruses. The songs themselves have some decent groove in them sometimes (remind me a bit of late Neuropathia) but just as some good massive riff comes in another sloppy one intrudes and then those terrible, terrible vocals just spoil everything. I will not mention the last track, some sort of disco-remix that probably will make someone laugh. But – me – I personally think I just lost some minutes of my life.

How could a band like this get signed is really beyond me. If they ever managed to somehow kick out the vocalist(s?) and truncate all these shitty moshpit chugs in between, something good could be harvested from this shit, but I have little hope in that. Sorry, it was a pity since the label has been producing good stuff in the past, and this is probably the only updated review you are seeing in a long time. But stay away from this stuff, very FAR. 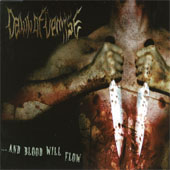 Uhuh! So Jacob Hansen owns a recording studio now? Is it the same guy behind Invocator and Maceration? if we’re talking about the same guy, he did a pretty decent job with this band at the recording console.

From a broad perspective there is nothing wrong with Dawn of Demise. The band plays solid, chunky brutal Death Metal with very deep vocals and an american imprint. Even when the songs speed up there is a sense of intrinsic staticness which the band probably looked after to make the whole sound even more granitic, think of a moderate version of late Deranged or mid Meshuggah (death metal version). My point however is that once you want to make everything as solid and as compressed as possible with constant palm muting chugs and so on, you could as well push through it to the end as Deranged does. Danish bands historically lacked “it” even when the crunch was pretty decent (except maybe, Infernal Torment?) and I am afraid we’re not far from that situation with this 3-track as well. Don’t misunderstand me – this is honest, well written stuff with a great emphasis on the groove, and it might be good stuff to hear at 4pm in some late night after show in any Germanic country, yet I believe the music fits the crispy recording and the heavily CGI-elaborated cover art: they’re neat but a little bit lacking of “sickness”. I can’t say I don’t like deep growls, power chords, or bloodstained knives, but all of this sounds a little bit polished for my tastes, and I just can’t force myself to like the mosh-pit grooves, although I know somebody else is looking for exactly this stuff.

Bear with me now: my number one rule for great Death Metal, is “if you can dance at it, it can’t be good”.