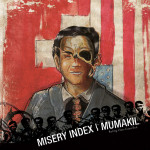 Oh come on. Is that really an half skeletal corporate man with a bunch of oppressed black victims against an American flag on the cover? Don’t they really ever get tired of that stuff? I seriously think I got my full share with Brutal Truth‘s debut, and that was 20-something years ago. Seriously, the booklet is fine, but the lyrics here sucks worse than some teenager punk band from some obscure burg in the rocky center of Italy. Well that’s worth for Misery Index at least, as I can see no Mumakil lyrics in here. I’ll spare the suffering of discussing what the subjects of these lyrics are about, you can grab any Dead Kennedys record and get something a million times better written.

Contrary to Brutal Truth, however, which even on the first album had string grindcore influences, I can hear nothing I can call even fairly grind in Misery Index. I really wonder what the fuck everyone is listening at these days and dare to call grind fucking core. This band have the fattest motherfucking sound ever, so clean and crisp you can use it to cut pepperoni for your pizza. They even have some chunky reminiscences of Dying Fetus (well that cannot be considered a falut, I guess Jason probably contributed a little bit to his old band’s sound), grunts and all. All this rant says basically nothing so far, bit that’s just because I could not force myself to find anything remotely interesting in this recording. Average seems to be the fitting term here, superbly average fast, modern, American-styled Death Metal full of all those accelerations and barking. Not my cup of tea.

As for Mumakil, things get a litytle bit more complex. They have some extra layers of screams and grunts, probably some less refinement in their songwriting which I can’t but appreciate, yet they still sound as uninteresting as a band can be. Considering they take the name from a Middle Earth creature, share the same cover as Misery Index, and print no lyrics, their music is all I can rely on to identify what the personality of the band is. And at the third listen, I still cannot distinguish this stuff from a billion other records. Sure, they seriously kicked Misery Index ass on this split, but we’re still far from being memorable even for a single second.

I cannot say anything band about this split, but I can’t say anything good either. 7″s are cool however, and this Cd has been pressed on wax of different color. Does that count?