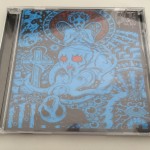 I got this promo Cd a couple of months ago with a letter that stated “we play goregrind”. Actually I think the band is certainly brutal but I won’t rate this music as pure goregrind, despite the hyperblasts and the super-guttural vocals, as the metal inlfuence here is definitely too big. Would you rate bands like Enmity as “goregrind”?

In any case let’s start with the packaging: I really dig the twisted cover art that looks like some deranged mix of Miguel Ángel Martín and Turkka G. Rantanen, it certainly sets the stage for something sick. The booklet is non-existant as it’s just 2 pages and the inner fold contains just the logo, but I think overally this minimalistic style is OK. What’s interesting is that there is no tracklist whatsoever, just like our old beloved Sublime Cadaveric Decomposition.

Like I stated before, here we are in front of some experimental kind of extreme, chaotic grinding Brutal Death  in the vein of Enmity or Intense Hammer Rage. While the meaning of the term grindcore certainly shifted during the last 20 years, I still figure of it as a genre that should have a combination of very raw and dark sound, and borderline dissonant riffs, and most of all, being totally unaware of what’s going on. Despite the speed and multiple layers of sound the musicians here seem to always be in control of what is happening. I like the whirlwind guitarwork as well as the furious blasting however, as these guys really know how to fill all the corners of sound. Mix in some heavily distorted vocals and you get a bleeding carcass mutilated by a million razords for the lovers of the genre.  All of the songs are very short, between 1 and 2 minutes in length, but they still manage to throw in some interesting variations.