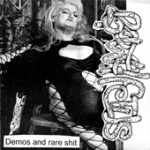 This Cd-r contains a lot of rare and alternate tracks from my beloved Bowel Fetus, a band able to mix gore-grind with the best of sludgly doom/death. The compilation opens with a ridicolously rare “The First Session” release (5 copies made?). Bowel Fetus here was more like classic mid tempo goregrind with a very fake sounding drum machine, the ability to program it better might be the greatest leap in quaily this band had since these tracks. Some hints of doom are present here, but as normal, the development is not as total as in “Bloodsoaked Doomageddon”. The “Rehearsal August/October 2004” includes tracks 5-8 and include another Impetigo cover, a personal version of “Wizards of Gore” mit cyber sounds, I am afraid the tribal feel of the song is almost on-existant here, but fuck, how can you possibly do as good as the original? The sound is very clear anyway, for a reharsal, but either I can’t hear them, or there are no vocals in these tracks. The riffs are okay, but are mostly mid-fast and that is probably not the real shit for this band. Listening to the last few tracks of this rehearsal, you could hear Impetigo were a big influence for Glen at the time, as they have that feel of punkish groove that was so perfectly deleoped by our gods of Illnoize. The ninth track is pure sludge/drone doom, originally recorded as a bonus for the split tape with Viscera. This is really when this band starts shitting violets as we say here, this stuff is phenomenal, a bit in the vein of “Transcendence into the Peripheral”, with a resounding vibe that always remind me of a empty hangar. Fast Autopsy-worshipping riffs and chain tire vocals are all present in this track, fully developed. The two songs from the split with Gruesome Toilet start with pure noize bursts, nothing more to add to 1 second long songs. But there are also some unreleased ones which have solid structure and rather diverse structures from the classic Bowel Fetus including a weird B-52 cover. The song from the split with Anal Throne is also quite atypical, mostly composed around a single chug, but it ends in a funeral doom leak. The album ends with an Autopsy cover… terrific!