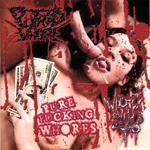 One funny but a bit annoying thing is that the tracks of the band are not split in two parts but instead are inserted in intervals, so you get all odd numbers with Putrid Whore and all even ones with Whore Evil. Eh eh. Nice.