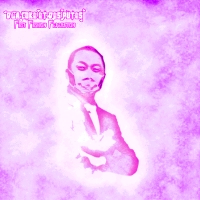 From a first glance at the shocking pink cover I’d have bet this was some freaky “Japanoise” project in the vein of Niku Dorei or Boredoms. The truth however revealed itself to be quite different: D’la Coke et Des Putes (which might means something like cocaine and whores, at least it’s my guess since my lack of knowledge of this language is complete, I don’t even know how they spell “1” – is it “ein”, “an”, “eine”, “oun”?) is actually a French band with two vocalists and humorous lyrics alike, just to name some country mates, the great Beer Vomit or Gronibard.  There is a weak link to what were my earlier considerations though, as the album was in fact recorded in Japan and, trying hard to decipher what’s written in the booklet, I dare to guess the guy pictured on the cover is some random person they met during their trip (not completely sure of that though eh. Despite the shocking pink color, the layout of this thing is not bad, we have a spread collage of pictures, another two pages of name combinations which ranges from “dicks and asses”, “bums and policemen”, “eggs and chicken” and so on. This must be their personal interpretation of the yin-yang philosophy eh eh.  Then we get some more random pictures and a long thank-list, let’s say routine stuff.

Using labels like Powerviolence, Freeform Noise, Grind Core etc. might be hazardous ground here as I can hear some sparse breakdowns and samples but no real crunch in between these. I certainly cannot claim this album is altogether something as disastrous and untalented as Subterranean Fecal Root, but in all honesty the parts that should consist in real music are rather uninspired. Despite the double vocal effort is supposed to give this album an extra punch all I hear is mouse squeaks over a texture of timid hard-core and painfully average metal riffs straight outta some high school show. Even the recording is somewhat under par for my (maybe a bit stereotypical) expectations of Japanese precision. The whole sound and songwriting here is quite flat, and even some choruses just don’t raise attention. I am always intrigued by flashy weird covers like this one, but this time I have been quite underwhelmed. Pity.