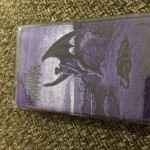 They handed me this tape promoting it as “death/black” and while I ever married any genre Death/Black Metal generally speaking works for me. Not this time tough. I like raw and primitive, but what I mean when I say that is generally raw and primitive as in Von, not as in “college rehearsal”, eh.

The be completely honest there is nothing entirely out of place here, barring, ahem, the riffs. These songs (I am not sure if this is a promo tape or a tape album) could be summarized as Hellhammer playing Death Metal in a rehearsal room with session member from the local garage punk band. While primitive and graced with really good death vocals (hell yes, good mix of raspy and deep), the Motorhead-like pull isn’t really working out well here, it just doesn’t click. This, coupled with the kind of rehearsal sound that spoils the thickness of the sound instead of giving it an edge of rawness, summarize a scarce 5 points in my book. The concept is good, and the idea of bringing early Hellhammer-like metal into Death Metal ground is cool, but I would rather start chopping off the sloppier riffs and keep just the better ones.

EDIT: I got confirmation that this is actually a “demo” tape.