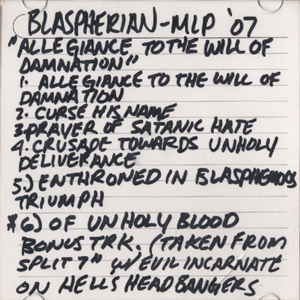 Oh my, I am really getting tired of listening to only good bands these days (ah ah)? Seriously speaking, Blaspherian is another of those bands you really do now want to miss from the freshly renewed scene of real Metal of Death: a band that walks the fine line between doomish Death Metal a la Autopsy and Winter and Brutal Satanic Death a la Imprecation, Incantation, Vital Remains, Hibernus Mortis etc. Deep, infernal vocals creep out of a wall of sound made of sludgy riffs and nastily twisted, low tuned distortions – these songs are glorious hymn of blasphemy, obscure and foul, no frills or guitar wanking, just blasphemy. As usual, we’re reminded that you don’t need overly complex guitarwork to make the Death Metal alchemy work – most of these songs are relatively straightforward, but at the same time full of grim dark force. You got all the powerful crunch without the shitty slam wiggerish shit if you know what I mean. This is definitely how Death Metal is meant to sound like. Maybe it is just lacking a little bit of that eerie, disturbing feel of early Incantation to be really perfect (you know, that hidden, malicious vibration), but we’re definitely splitting the hair. If we talk about American bands, this is definitely one of the best I heave heard lately, as the real Death Metal movement seems to be mostly an European thing recently. Blasphemous, deep Death Metal for lovers of dark sounds and guttural brutality.

This album has been released by Die Todesrune, an otherwise pretty inactive label for what concerns true Death Metal, apart from Crucifier from what I remember. They also have a split 7″ out right now on Hell’s Headbangers, sharing vinyl with the excellent band Evil Incarnate. Next to be released is another 7″ by the name of “Unholiness Unleashed” and a second full length by the name of “Infernal Warriors of Death”. No need to say this is the stuff for which is worth spending your money.