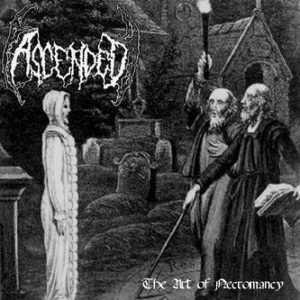 There was a time, in the first part of the nineties, when I was totally obsessed with Finnish Death + Black Metal. Of course Sweden had THE scene, but bands like Purtenance, Archgoat, Demilich, Xysma or Depravity (and I can go on forever) had that special, unearthly feel that just took the most extreme genres and made each one of them even colder and darker. Finland just meant “sickness” in its most undiluted form, blacker Black Metal and darker Death Metal. Time went on and basically every one of these bands either disbanded or turned into some shitty rockn’roll a la Lubricant. Time to forget about Finland for a while… but like the Swedish scene has been resurrected, so seem the Finnish one has its good share of new talent to exhume, and this Ascended is really among the best ones I heard in a long, long time. Like for other old demos on the blogzine, Ascended actually recorded more stuff after this demo, but having been mostly an inactive couch potato for more than 5 years it was a great surprise for me to hear we have still great death/doom being concocted among the cold swamps of Fennoscandia. This excellent demo Cd-r was handnumbered to 100 copies but mine has no number so I guess is part of a second batch. The packaging is bare as it should be with classical lineart on the cover and very simple inlay (lyrics, general infos and so on).

The thing I love more about this demo is the sound of the drums. They reverberates like a gong, filling the whole soundwave with a distant, omnipresent, evocative vibe. Every beat seems to raise the atmosphere to the next level of dismal oblivion. The band is VERY different, but I can find some common feel with, early Eucharist or Necros Christos on the slower, more abstract, detached  moments.  Ascended is however not an entirely Death Metal band and there are no melodies of sort in their sound. I think they can arguably be defined as Death Metal with some good Doom/Death influences, but I don’t think they can be rated as a strictly Death/Doom band either. They are grinding slow at times, and almost obsessive in dragging riffs forever in an hypnotic way, but I will not use any other term but good, solid Death Metal. The vocals are deep and monumental, just like the music. This demo is a cathedral of sound, with an obscure halo hovering over it.

Thanks Finland for still being present. 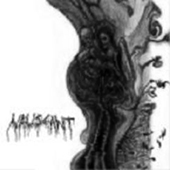 Now this is finally something really interesting. There’s this dissonant, progressive-schizoid aspect in Stockholm’s Nauseant that is really something we don’t hear every day. We’re not talking about some shredding guitar display or some crossover incursion into Jazz or some other irrelevant genre, but about really atonal Death Metal in the vein of Demilich, Carbonized or the more recent Diskord. I really do like when a band has the courage to attempt a trip into these indistinct lands of intricate melodies, always turning and weaving and morphing into another identity. And I like it even more when the sound remains strongly rooted in dismal Death Metal – for being indistinct and avant-garde doesn’t necessarily mean sewing together a million different genres. Nauseant is ever-changing, ever reshaping, but still maintain identity in its sound and feel, with hyper-guttural vocals as a static basement over which the song is shaped. I cannot tell much about the lyrics since they’re not included here (but hey, it was cool to read my copy is one of 30 hand-numbered Cd-rs!). The packaging is bare and essential, just a warped abstract column of flesh with a logo close to it, the kind of bare necessary I appreciate in a demo Cd-r. I cannot recommend this one enough, I would like to hear more bands like this. 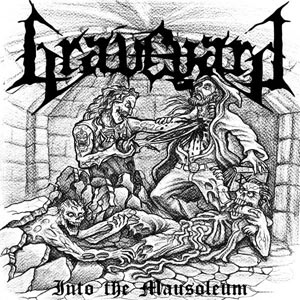 Now we’re talking, baby. While it’s true nobody can clearly state when the Death Metal phenomenon came out, I guess everybody would agree the peak of it was just cross 1990 (year more, year less). That’s the time when it attained its clear identity, still freshly rooted in the carcasses of other musical genres soon to be dead like punk and thrash metal. It is in that rotting, dark, gloomy and worm infested environment that we first perceived Death Metal was getting a status as a genre on his own, instead of being just an adjective for other forms of metal. I gave up long time ago any hopes that the spirit would come back again, but at least I hoped that people could understand a glimpse of how magic that period of my youth was. Even if there are several things I don’t like in reunions of legendary bands and teenager revivals, I admit the Death Metal scene has never been so healthy in over 15 years.

All this bullshit to introduce one of the best results of post-2000 retro-Death Metal phenomenon. Graveyard from Spain are just playing with the same convincing spirit of the real founders of the genre. I have dug deep in my lexicon to find words to describe this music, but I realized there was no need to describe it, it is just Death Metal with capital “D”. Obscure, murky and grotesque as early Finnish demo bands like Depravity, Abhorrence or Funebre, yet with a few bursts of the galloping ride frenzy of early Unleashed (curiously this is limited to a few riffs, you just can’t hear that kind of songwriting all through the songs).Even if I adore this shit, I have to admit other bands like Dead Congregation or Crucifire are preparing the same dish but with a much improved recipe. In other words, you probably have to do something more to stand out of this new wave of old school bands flooding the underground. Much appreciated by me however, since the sound is flawless. Great roaring, slightly echoing vocals, crunchy super distorted guitar sound, and an eerie, disturbing melody all over make this band a must have for a good collection, I hope someone does it on vinyl one day. I can live without the melodies however, if you know what I mean.

No comments on the packaging today, since it’s just a home made Cd-r with xeroxed cover. I find the cover art a bit too ironic too.